Perspectives from a Minnesota Delegate: The Many Faces of U.S. Climate Action at COP24

The 24th session of the Conference of the Parties (COP24) brought together around 200 countries to continue the worldwide initiative to reduce greenhouse gas emissions. After two weeks of negotiations and strategizing, this COP saw the creation of the official rulebook for implementing the Paris Agreement. Minnesota, a member of the U.S. Climate Alliance as well as the We Are Still In campaign, found itself on the world stage as delegates from the state attended the international climate conference.

Minnesota became the first Midwestern state to join nine others in the We Are Still In coalition during the MN is Still In day of climate action hosted by Climate Generation: A Will Steger Legacy in June 2018, promising to uphold the Paris Agreement commitments of the U.S. alongside businesses, universities, cities, tribes, cultural institutions, and faith-based organizations.

Climate Generation is a nonprofit based in Minneapolis, MN empowering individuals and their communities to engage in solutions to climate change. Since 2009, Climate Generation has sent a delegation to COPs to represent sectors in society – from youth and educators to policy makers – that have a place in the conversation on climate solutions.

Jesse Turck, an architect and project manager at BWBR, was one of Climate Generation’s COP24 delegates, and wrote this blog post about the U.S. Climate Action Center while he was on the ground in Poland:

The U.S. doesn’t have an official pavilion at COP24.

Many countries have varying degrees of elaborate pavilions showcasing their efforts on climate change and some have areas for presentations. However, the World Wildlife Fund allowed their pavilion to be switched over to the U.S. Climate Action Center for four out of the fourteen days of COP24.

During that time, they hosted numerous presentations on what is happening in the U.S. Especially highlighting the “We Are Still In” initiative where states, local governments, and businesses signed on to continue working on meeting the Paris Agreements goals. So far, they represent 154 million people, in all 50 states, and represent almost $9.5 Trillion in GDP. If this was a country, it would be the third largest economy in the world. 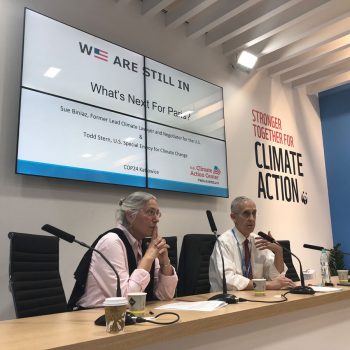 I was able to attend the “What’s Next For Paris?” session lead by Sue Biniaz, the Former Lead Climate Lawyer and Negotiator for the U.S. and Todd Stern, U.S. Special Envoy for Climate Change. They described some of the challenges the negotiators are facing here in Katowice. One of the goals for COP24 is to establish the official rule book for the Paris Agreement. This is an extremely complicated document that defines what all the countries are required to do to meet their Paris commitments.

The negotiating teams for each country have several layers of negotiators, the more complicated aspects are only understood by the people working on specific, often interrelated, issues. It can be challenging for the leaders of each country’s negotiating team to understand all aspects that are being negotiated.

Adding to the challenge is that the Paris Agreement doesn’t force countries to do anything they don’t want to do.

Fingers crossed, they come up with something this week. They also highlighted a few of the changes that are coming after this year’s midterm elections. The Democratic control of the house will give more chance for oversight and investigation, but likely will not be able to pass much for their own agenda.

The U.S. did have one official side event at COP24. It was titled: “Innovative Technologies Spur Economic Dynamism.” I think it was an odd title, but even worse was the fact that they were promoting the virtues of fossil fuels, the main reason we are here in the first place. I walked by the room early and the line was out of the pre-event space and a long way down the hallway. We had gotten word that there would be a protest during the presentation but didn’t know what was planned. After the event started numerous protesters got up and chanted “Keep it in the ground!”, among other things. It makes me sad to be an American, when instead of being a global leader on climate change our country’s one event is seen as a joke by the rest of the world at the international climate negotiations. 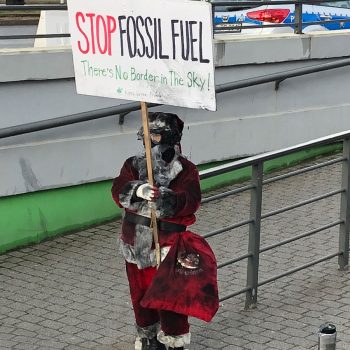 Fossil fuel protester outside the conference

Outside of the main entrance there was a version of Santa unlike I’ve seen before but makes a great point — there is no border in the sky.

Jesse Turck is the longest running member of BWBR’s Performance Design Group and tracks and reports building energy data for the AIA 2030 Commitment. Jesse is a past Co-Chair of the AIA Minnesota Committee on the Environment, is a member of AIA Minnesota’s 21st Century Development Task Force, the MN Resiliency Collaborative Steering Committee, and is a graduate of AIA Minnesota’s Leadership Forum. Jesse is also a Climate Reality Leader and has given numerous presentations on the causes and solutions to climate change to hundreds of people, including architects, farmers, students, and foreign dignitaries.